Zoe Saldana did her most revealing interview yet - and a photoshoot to match - with Allure magazine. 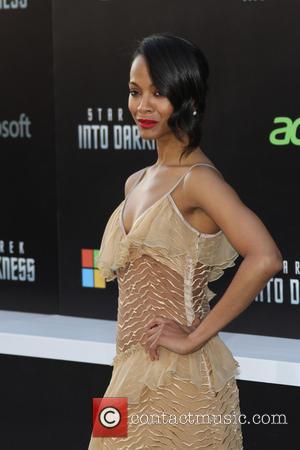 Zoe Saldana bore all for Allure magazine recently – her body, her weight, her fluid take on sexuality and more. The spread in Allure definitely shows off the Star Trek Into Darkness actress’s thin frame, but she has even attached a number to her figure: “115 pounds of grit and heartache,” as the cover boldly proclaims. After the magazine hit the stands, Saldana talked to Savannah Guthrie on the Today show about the choice to reveal her weight: "I think it would have been wrong if they were lying about my weight. This is how much I weigh. It's something I can't control. It's who am. I've always been of a very thin frame. I was a ballet dancer. So they wanted to do that. I don't think it was to make an issue of my weight. I think it was to talk about that for a lightweight person I seem to be really strong minded."

It’s hard to see the correlation (or lack thereof) between the actress’s weight and her will or see how the number is relevant anyway. But if the title doesn’t get you to read it, the contents of the article are definitely more interesting – and we’re not even talking about the almost nude photoshoot. Saldana exposed herself in more ways than one during the Allure interview, as she also talked about her romantic preferences: “[I might] end up with a woman raising my children,” she confessed to the magazine. “That’s how androgynous I am.”

The actress later clarified her answer to Guthrie and Today viewers: "As of now I've been attracted to the male species. I don't know if that will continue but if one day I wake up and feel differently about who I find attractive I wil do that and I will be supported and loved by those that support and love me."

Good to know. Ladies, if you have ever hoped of getting a chance with Zoe Saldana, take note. Hope might not be lost just yet. The actress is not embarrassed of her body.