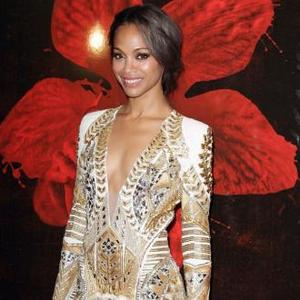 Zoe Saldana has signed up for 'Machete Kills'.

The 'Star Trek' actress will appear alongside Sofia Vergara, Jessica Alba and Michelle Rodriguez in the follow-up to 2010 action movie 'Machete', and Danny Trejo - who is set to reprise his role as blade-wielding Mexican Federale Machete Cortez - can't wait to kiss all four girls in the film.

He said: ''The sequel to 'Machete', 'Machete Kills' is going to be a lot more over-the-top than 'Machete'.

''We've got Sofia Vergara, who is a star in her own right, Jessica Alba, Michelle Rodriguez, and Zoe Saldana - and guess what? I get to kiss all of 'em.''

Amber Heard is in line to play an assassin in the motion picture, which will see Michelle and Jessica reprise their roles of a taco-truck lady and an immigrations officer, with Robert Rodriguez returning to direct the project.

'Machete Kills' - which is scheduled to begin shooting in Texas soon - will see Cortez aim to stop Mel Gibson's villain from firing a missile.

As well as looking forward to reprising his role in the film, Danny is also hoping to land a part in Robert's forthcoming 'Sin City' sequel.

When asked if he would like to star in 'Sin City: A Dame to Kill For', he joked to Moviehole: ''I better, if [Rodriguez] wants to do 'Machete 3'.