Zoe Saldana Is Open To Plastic Surgery: "I Wouldn't Mind Buying A Pair Of Breasts"

Zoe Saldana is "obsessed" with breasts and "wouldn't mind buying myself a pair before I die." 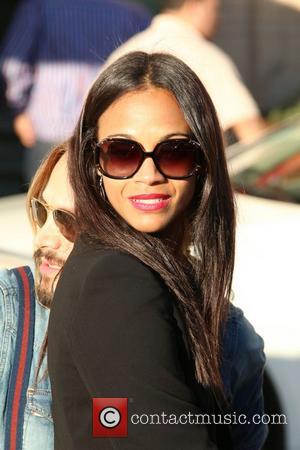 Zoe Saldana is known for having one of the most desirable and slim figures in Hollywood.

But the 35 year-old actress still feels there are areas that need improving.

In an interview with Lucky Magazine for their February issue, the ‘Avatar’ actress revealed she “wouldn’t mind” changing a few aspects of her body, mainly her breasts.

"You always want what you don't have. My whole life I've been obsessed with breasts,” she said. "I love them. I don't like fake things, but I wouldn't mind buying myself a pair before I die.”

However, she certainly does not think a female’s breast size is the most important aspect of her body image.

“When I hear men saying, 'I don't want droopy breasts,' I think, 'I'm sorry, you're not really a man.' A man likes a woman as she is," the star rants. "You know when you meet a real man from the way he talks about a woman. You just go, 'Wow, you're a man.'"

Saldana also explained how different fashion choices can represent different traits of an individual, she said, "I like looking strong. I don't need someone to open the door for me. I can open a jar!”

"For some reason, dressing very delicately brings out a fragility that compels people to help you and, I don't like it."

The ‘Star Trek Into Darkness’ actress refused to discuss her marriage to Italian artist Marco Perego as their wedding was held in secret this past June in London. But she did talk about not really caring if people criticise her own style.

"I can give two s***s about what somebody thought I looked like,” she said. "At the moment I conceived wearing an outfit, I had a thousand reasons.”

"And now that it's done, and I'm getting feedback that's not positive, I'm going to regret it? I take responsibility for my actions, whether the outcome is positive or negative." Zoe Saldana would consider a breat enlargement in the future