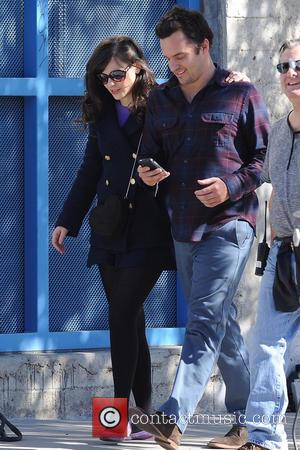 They had three more seasons in which they could’ve dragged out the sexual tension between Nick and Jess, but instead the creators of New Girl have opted to get it over and done with – the pair smooched for the first time in the latest episode, giving the writers a whole new challenge as to what direction to go in with over the forthcoming seasons.

The kiss apparently almost didn’t happen; originally Jess (played by Zooey Deschanel) and Schmidt (Max Greenfield) were supposed to be behind a curtain in a game, and given orders to make out. However the storyline changed to it being Jess and Nick (Jake Johnson); even then they’d decided that the episode wouldn’t end in kissing, only to change their mind shortly before shooting. “Liz [Meriweather, series creator] pulled me aside and said they changed the end of the episode,” Johnson told Entertainment Weekly. “I said great. In the past we’d have to do another take because Nick and Jess were sitting too close together and they wanted to keep us apart. So we were really excited we were allowed to go for it.”

According to Meriweather herself, she said: ”We were right on the edge of starting to spin our wheels with their story and holding out any longer felt like not an honest thing. It felt exciting to give ourselves this challenge of how are they going to get out of this or how is this going to affect everything. We came up with the way for him to kiss her the way he wanted to. And as we were pitching it out we were all like, ‘That’s hot!’” Of course they now have three more seasons to think up how this is going to develop; as we saw in Friends, Ross and Rachel’s relatively early relationship in the show worked out well, the pair subsequently breaking up and having a will-they-won’t-they friendship for long after, before a happy ending. Maybe this could go the same way. Zooey Deschanel on the set of New Girl