The 'New Girl' actress triumphed in her impeccable styling.

Though Zooey Deschanel may have not won an Emmy Award this year for the hit comedy, New Girl, the actress made sure that she was the centre of attention on the red carpet style ratings. Deschanel, 33, ditched her usual knee-length skirts and ballet pumps for utterly elegant attire that was in perfect keeping with the prestigious television awards. Dressed in a floor-length, icy blue J. Mendel gown, Deschanel put a twist on her usual heavy block fringe with some luxurious curls. The dress featured daring details - such as a side split and keyhole bodice - that were kept classy by the shining blue silk and the tumbling waist sash. She topped off her red carpet glamour with a glittering box clutch, a Chanel tourmaline cocktail ring and a pair of incredibly high white satin heels. However, Zooey wasn't the only Deschanel sibling to turn heads at the awards ceremony. Her sister and Bones actress Emily Deschanel was also in attendance and together the two glamorous ladies presented the award for the best 'Supporting Actor in a Comedy Series' which went to Veep's Tony Hale. Emily, 36, was also wearing a particularly special outfit for the event, combining her strong personal sense of style with her ethical standards. Were Zooey's Mega Heels A Size Too Big?

The PETA spokesperson wore a pair of custom vegan Aldo shoes to promote animal welfare, as well as a custom Houghton, off-the-shoulder lace gown in a similar icy shade to her younger sister. Though Emily stuck to pearlescent white nails and jewellery, her fun, nail art-loving sister Zooey headed to the nail parlour for an extra special manicure.

The twice nominated Golden Globe actress had paid a visit to Tom Bachik - nail artist extraordinaire - for a unique black and white chequered design that wowed alongside more conventional 'manis' on the red carpet. Emily Deschanel's Blue Gown Coordinated With Zooey's As The Pair Presented An Emmy.

After the decadent awards evening had wound to a close, Zooey tweeted her excitement at having hosted one of the awards with her sister: "What fun it was to present at the #Emmys with the best big sister in the world: @emilydeschanel." 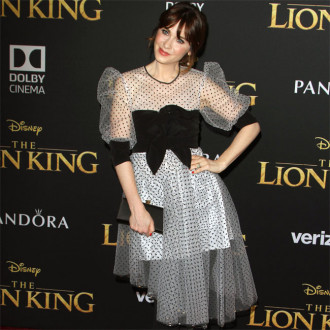