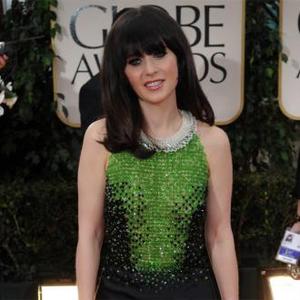 Zooey Deschanel and Natalie Portman will make guest appearances in a forthcoming 'The Simpsons' episode.

The 'New Girl' actress will reprise her role as Mary Spuckler - the daughter of Cleetus who Bart Simpson came close to marrying in season 19 - and she will be joined in the same episode by characters voiced by Natalie, Anne Hathaway, Sarah Michelle Gellar and Sarah Silverman.

The quartet will lend their vocal talents to the roles of four of Bart's former girlfriends when the 10-year-old boy goes on a romantic pilgrimage to visit his former love interests.

'The Simpsons' consulting producer Tim Long, who wrote the episode, is quoted by Entertainment Weekly as saying: ''It was a way to acknowledge that for a 10-year-old boy, Bart has gotten a lot of action.

''We thought it might be fun to borrow/pay homage to/steal an idea from 'High Fidelity' and have him go on a romantic pilgrimage and visit the girls that he dated and try to figure out how the hell he screwed things up with each of them ... I don't want to give away too much, but he realises that maybe there's something wrong with him after all.''

The 'Moonshine River' episode will see Bart briefly meet former flames Gina (Sarah), Darcy (Natalie), Jenny (Anne) and Nikki (Sarah) before learning that Mary (Zooey) has relocated to New York, so he tries to track her down in an attempt to reconcile his relationship with her.

Tim joked: ''Any resemblance between this episode and 'Breakfast at Tiffany's is completely coincidental.''

The episode will air in the US this autumn as part of the animated programme's 24th series, which will also feature vocal cameos by Steve Carell, Fred Armisen and Jennifer Tilly.