Zosia Mamet is pleased with the results of her drastic new haircut and says she wanted to cut her locks ''forever''.

The 'Girls' actress debuted her cutting-edge bob at the Golden Globe Awards last Sunday (12.01.14) and has now admitted she was bored of her long hair and fancied a radical change.

Speaking on the red carpet at the 'Girls' season three UK premiere at London's Cineworld Haymarket, she enthused: ''I've wanted to cut my hair for a very long time, I've had long hair forever. And I asked the powers that be on our show and they said I could go for it and I just did it!''

Zosia's ditsy character Shoshanna is famed for her quirky sense of style as well as her eccentric one-liners, and the actress thinks her alter-ego's hairstyles are one of the best things about playing her.

She explained: ''Shoshanna is good at doing her hair. I couldn't do all those hours.''

Lena laughed: ''The amount that I got tweeted pictures of the donut-head hairstyle at Halloween was the best thing ever.''

Zosia braved the British weather on the red carpet last night (15.01.14), with the fashion-forward star dressed to impress in a pale pink Elisabetta Franchi playsuit.

'Girls' season three kicks off on Sky Atlantic on Monday, January 20 at 10pm. 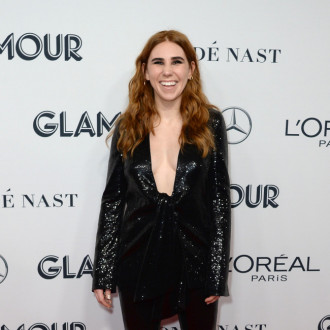