Review of Suck It And See Album by Arctic Monkeys

The lyrical landscape wandered by Alex Turner has changed with each Arctic Monkeys album. Throughout their cocky, confident debut Whatever People Say I Am, That's What I'm Not, he was stepping over half-eaten kebabs and floored drunks outside a Sheffield club, detailing the chaos around him with the sharp eye and easy affection of a naturalist documenting the activities of Congolese gorillas. Favourite Worst Nightmare, the band's superior, undervalued follow-up, saw him standing silently in the corner of a joyless, desperate music industry party, sipping sullenly on his drink and fixing his beady eyes on the false bonhomie and suave vacuity of his fellow guests. Then came Humbug, the band's erratic third album: this time, Turner was sat outside a Texan ranch, strumming absent-mindedly on his guitar and a bird of prey wheeled lazily in a clear blue sky. 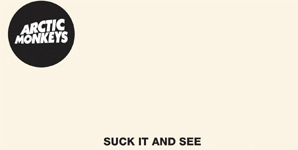 Three albums, three landscapes. Three different settings for Turner's intricate flurries of words. He has certainly demonstrated his versatility as a writer, albeit at the cost of alienating some of the band's early fans, the fans who demanded a never-ending stream of stories about nights on the town. His band have changed with him. At first, they played surging British indie rock; nowadays, they have a subtly menacing, Americanised sound which (again, to the dismay of some) draws on the work of Humbug producer Josh Homme.

On Suck It And See, the band seem content to halt the continual march of change, to pause for moment and look back down the road they have been travelling. It's the first Arctic Monkeys album which builds on their previous work rather than pushing it away. This time, there's no dominant lyrical mood or subject; one moment Turner is indulging in romantic imagery, the next he's being playfully surreal or sarcastic. There are songs which (and this is a good move) build on the mix of desire, insecurity, love and loneliness previously explored on Favourite Worst Nightmare's '505'; songs like 'She's Thunderstorms' ('Lying on her front/Up against the wall') and the title track ('That's not a skirt girl, that's a sawn-off shotgun/And I can only hope you've got it aimed at me'). 'Don't Sit Down 'Cause I've Moved Your Chair' is the Flavor Flav to those tracks' Chuck D, trading in serious intent for a burst of inspired nonsense. 'Run with scissors through a chip-pan firefight/Go into business with a grizzly bear/But just don't sit down 'cause I've moved you chair', Turner deadpans.

Anyone familiar with Humbug will be unsurprised with the group's musical template. There are snaking, sinister riffs. There are tracks where the rhythm section adopts a classic rock swagger. There are slow, heated, sweat-dripping numbers, and faster, crunching, biting numbers. But not everything has stayed the same: some of the melodies here are stronger than any on Humbug, and for that reason, songs like 'Piledriver Waltz' will stay with you longer than any track on that album. There are also no pounding, balls-out rock moments equivalent to, say, 'Pretty Visitors': this time out, the band are more restrained and economical. These refinements constitute an improvement: they give Suck It And See a unity and immediacy its predecessor lacked.

Suck It And See isn't the capital-I Important album that some fans want the band to make; it doesn't try to make a big statement, either musically or lyrically. Your mind won't be blown. But, to be frank: so what? It's difficult not to feel that some people expect too much from the group. They've just made a consistently impressive, quietly confident record which refines and builds on their existing strengths, and that should be enough.