Axl Rose has revealed he is working on a new GUNS N' ROSES album and has promised fans it will come out sooner rather than later. 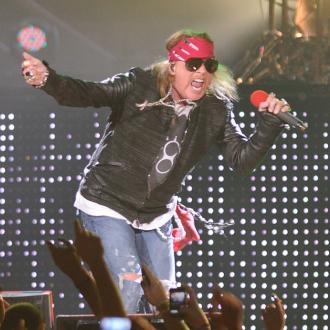 The 'Paradise City' singer has been busy working on material with his bandmates and he has promised fans they won't have to wait 15 years like they did for last LP 'Chinese Democracy' - which was eventually released in 2008.

He said: ''All the guys are writing, and we recorded a lot of songs over the years. We'll figure out what we feel best about. 'Chinese Democracy' was done in piecemeal with one person here and one there at different times. 'Appetite For Destruction' was the only thing written with lyrics and melody fitting the guitar parts at the same time. After that, I got a barrage of guitar songs that I was supposed to put words to, and I don't know if that was the best thing for the band. I do want to lean more toward lyrics and melody.''

Axl insists he isn't to blame for the huge delay between 1993 album 'The Spaghetti Incident?' and 'Chinese Democracy' and insists the LP became so problematic to make because of the difficulties of working in the music industry.

Speaking about the record, he told the USA Today newspaper: ''I had to deal with so many other things that don't have to do with music but have to do with the industry. There's such a loss of time. It was more about survival. There wasn't anyone to work with or trust. Someone would come in to help produce and the reality was they just wanted to mix it and get it out the door. They had a different agenda. (The next album) will come out sooner.''

Axl also admitted he can't see an end to his feud with the other original members of Guns N' Roses - which includes Slash and Duff Mckagan - coming to an end in the near future and he blames the hard rock group's huge worldwide success for their acrimonious split.

He said: ''I feel that ball's not in my court. I'm surviving this war, not the one who created this war ... I was really naive. I thought the success of 'Appetite for Destruction' would bring everyone together more. It did the exact opposite. They got success and wanted to run in their own directions. I thought they'd go, 'Whoa, it did work.' But they wanted to do their own huge bigger success off of Guns.''