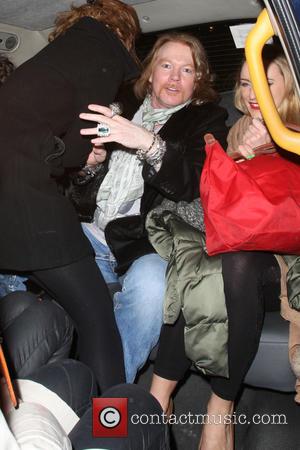 Rocker Axl Rose has written an open letter in which he takes aim at zoo bosses in Denmark for their lack of humanity after slaughtering a beloved giraffe to prevent inbreeding.

The Guns N' Roses frontman was left appalled last week (10Feb14) after learning about the death of Somali giraffe Marius, who was shot dead by handlers at Copenhagen Zoo and then chopped up and fed to the lions - all in front of a group of kids.

An image of the dead mammal went viral and prompted an outcry from animal rights groups, but venue bosses defended the move by insisting the cull was the only way to stop Marius from reproducing among his own kind.

Expressing his disgust at the killing on Twitter.com, he wrote, "Seriously, let me get this straight... the Danes killed a two-year-old baby giraffe, chopped him up and fed him to the lions - allegedly in front of kids - to avoid inbreeding, rather than find a place for it?

Now Rose has further detailed his anger in an open letter, entitled Marius, which he posted online on Monday (17Feb14).

In the lengthy note, Rose claims Marius' killing was "a waste of a healthy young animal's life" and brands the manner of his slaughter "particularly barbaric". He goes on to accuse zoo bosses of failing to show any compassion with their "seemingly cold and clinical responses and attitudes regarding this unfortunate event" as they ignored calls to find Marius a new home, and insisted they came across as "arrogant" and "completely heartless" as they defended their decision.

He adds, "For most normal everyday people that love, care about and enjoy animals this event has been a tragedy. An unexpected, unimaginable and what for many is most devastating a seemingly avoidable horror show (sic) that somehow seems lost on the professionals involved and those speaking for the zoo a facility that's in my opinion thought to exist for the animals, the public, educational purposes and science in as best a sense of harmony as possible.

"Just as it's a privilege for the public to visit, view and experience these animals it's also a privilege to work with and care for the animals and have the opportunity to do so while interacting and/or working with the public.

"Unfortunately somehow in this instance all or much of that seems to have been forgotten."