Blake Lively loves styling herself but thinks she would employ someone to choose her outfits when she has a family. 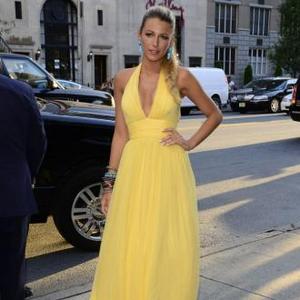 The 'Gossip Girl' actress prefers to put her own looks together as then she is responsible for her own mistakes, but she admits she may employ someone else to dress her when she eventually settles down to have a family.

She said: ''Styling is a lot of work! I guess I would consider [getting a stylist] in the future.

''If I had a family and I was going on a press tour, I would not be spending my time [researching fashion] - I'd be getting my kids their Cheerios.

''But I love it so much, it's a good outlet for my creativity. If you make a mistake [when you don't have a stylist] at least it's your own mistake.''

Blake also admitted she has only one fashion regret, when she was given a gown she knew wouldn't suit her but wore it anyway because she didn't want to upset anyone.

She explained to Vogue.co.uk: ''The only time I really felt a lot of regret is when it was something that I didn't want to wear - something somebody had made for me and it didn't turn out right. I never got to meet the designer and there was a lot Lost In Translation.

''I just felt bad because it didn't look right on me, but I wore it anyway as I didn't want to hurt people's feelings.''