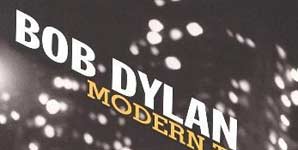 Dylan's first album since 2001's Love and Theft, Modern Times has been widely awaited, but mainly by Dylan fans. Love and Theft was held to be a pretty good Dylan album, with most of them being held up to the standards of Blood on the Tracks, but there is some extreme myopia involved.

Dylan gets cut a lot of slack because of who he used to be, but Modern Times is being compared favourably to the previous album. Let's put it this way: if your Dylan experience was between 1965 and 1975, don't bother with Modern Times - he's not the same man, he's not the same singer. If however, you have stayed with him through the 80s and 90s, and got to know who he is now, rather than who he was, you will find Modern Times a very decent piece of work. Workingman's Blues No 2 is classic Dylan, and he does sound, everywhere, as if he is having fun, with a lovely, relaxed feel (probably as a result of him producing the album himself). Not a bad album to start with if you fancy dipping into new Dylan.