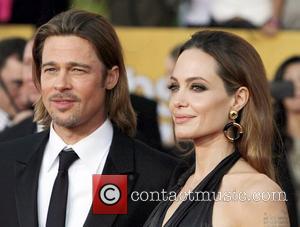 Brad Pitt and Angelina Jolie are expecting twins again, according to OK! Magazine. The news that their brood will now extend to eight children appears to have delighted the couple, according to the magazine's source: "Angelina is absolutely thrilled. She and Brad can't believe that they've been so blessed again. they are totally buzzing and have only spilled the good news to very close friends and family."

Meanwhile, Brad Pitt and Jonah Hill appeared on this morning's Today show and told the show's presenter, Ann Curry about the pranks that they played on each other on set whilst they were filming the six times Oscar-nominated Moneyball. Or, rather, the pranks that Brad played on Jonah. In the interview, Brad admitted that he hijacked the golf cart that Jonah had been provided with, in order to ravel from one part of the set to another. Brad told the show's viewers "I had Jonah's cart rigged. Whenever he turned it on it would blast Wake me up Before you Go-go. ... It was pretty good, I gotta say." According to USA Today, Jonah then retorted "If it was just that, that would be crazy. That would be annoying for me. But he had it shrink-wrapped bright pink, like neon pink, and superimposed a photo of George Michael on front . So I'd have a meeting and I'd drive up in this, like, insane, absurd, Liberace-style golf cart."

The pair also spoke of their delight at having been nominated at the forthcoming Academy Awards, with Brad commenting "this thing was an arduous undertaking. ... I'm happy it's paid off." No doubt he was also delighted at his family news, too, though he kept that under wraps for the duration of the interview.