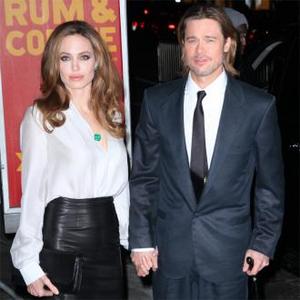 ''They are matching rose gold bands with a tablet-cut diamond in them and their vows to each other engraved in them.

''You can't see it with the naked eye but they both know they're there.''

The rings are now reportedly ready after months of work at the Grand Hotel du Cap Ferrat in the South of France.

Meanwhile, the A-list couple got into the London 2012 spirit by treating their eleven-year-old son Maddox to an elaborate Olympics-themed birthday party.

Brad and Angelina - who are living in Surrey while Angelina shoots new movie 'Maleficient' - hired out an entire sports centre for him complete with an athletics track.

A source told the Daily Mirror newspaper: ''Because Maddox's birthday fell right in the middle of The Games, they wanted to give him a special treat to mark the event.

''He's mad about sport. They had a mini track for athletics and a basketball court.

''The centre has its own wind tunnel and surf centre. They even had little stands where the kids could cheer so it felt like they were at the real Olympics.

''Brad and Ange invited all their staff to go along and spent the day there. The kids had an amazing time. It was really good fun for everybody.''

The 'Mr & Mrs Smith' stars - who also have Pax, eight, Zahara, seven, Shiloh, six, and four-year-old twins Vivienne and Knox - got engaged in April and are rumoured to be tying the knot in a few weeks time.