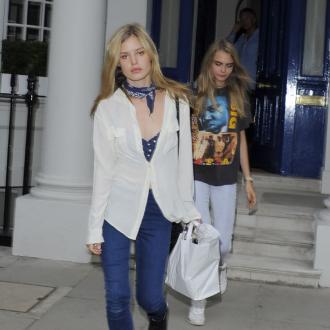 Cara Delevingne threw a wake for Georgia May Jagger's dog.

The kind-hearted model decided to cheer up her famous flatmate by organising a booze-fuelled ceremony to mourn her beloved pooch Poppy's passing earlier this month.

A source told the Daily Star newspaper: ''Georgia was completely devastated so Cara threw a mini-wake to cheer her up.

''Cara got out loads of photos of Poppy and they raised a glass to her in doggy heaven. They ended up getting silly drunk and having fun.''

Georgia, 21, was distraught when her canine companion died aged 16 at the start of August, and took to Twitter to announce her loss.

She shared a picture of herself cuddling the English sheepdog, writing: ''My beloved dog poppy died earlier this month at 16 years old. She was truly one off my best friends... (sic)''

Her fans offered their condolences, with one saying, ''Beautiful dog. I bet you gave her the best life. I hope there is room in your life for more pets'', and yet another empathising, ''I'm so sorry :( I know how it feels x''.

Cara moved in with Georgia - the youngest daughter of Sir Mick Jagger and Jerry Hall - in the spring.