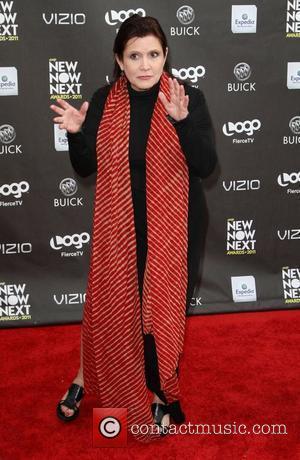 Carrie Fisher says she is squeezing back into her Princess Leia bikini for the J.J. Abrams helmed Star Wars Episode 7, revealing at a Canadian comic convention that Disney were helping her get back into shape for the role. "I'm glad they are doing a new movie because they are sending a trainer to my house so I can get in really good shape. So I'm really eating a lot of sugar in advance, as you can see. By the time I really get down to it I will have eaten everything," she said.

Fisher is known for her sense of humor and it's likely she was talking tongue in cheek, though it has only served to intensify speculation of her return to the franchise. It is known that Mark Hamill and Harrison Ford are in talks to make an appearance in Episode 7. Speaking at the convention, Carrie revealed how director George Lucas banned her from wearing underwear in the first Star Wars movie, "George did not let me wear a bra in the movie," she said, "They used masking tape - except for one scene when Mark arrives and R2 is blown up and we run under the ship. Please look closely at what's happening as I run toward the arriving mark."

Fisher first spoke of returning to the franchise in March. The new movie, one of several planned by Disney, is set to be released in 2015. Carrie Fisher At The Primetime Emmys In Los Angeles