Studio Executives Have Snapped Up Jurassic World Stars Chris Pratt And Bryce Dallas Howard For A Sequel To The Blockbuster, Which Became The World's Third Most Successful Movie Ever Earlier This Week (Beg20jul15). 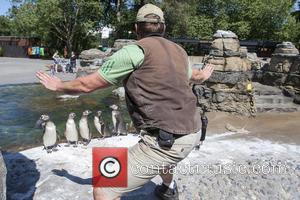 Picture: Woodland Park - In the wake of the movie Jurassic World's blockbuster opening, a new viral photo fad has been inspiring zoo keepers everywhere. Before...

Bosses at Universal Pictures revealed on Thursday (23Jul15) that a new instalment for the dinosaur action franchise will hit cinemas in June 2018.

Steven Spielberg and Frank Marshall will return as producers, Colin Trevorrow won't direct the new movie. Instead he'll work on the screenplay with Derek Connolly. Trevorrow's replacement is yet to be announced.

Jurassic World has become the monster hit of 2015, hauling in over $1.52 billion around the globe.