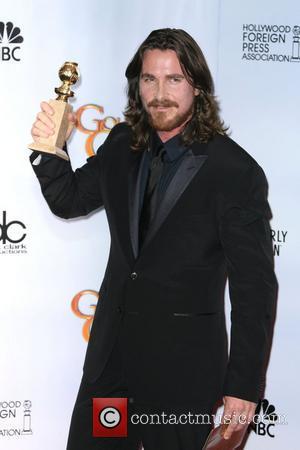 Christian Bale, the acclaimed American actor who last night (16th January 2011) was named 'Best Supporting Actor' at the 2011 GOLDEN GLOBES, has revealed why his acceptance speech at the ceremony was cut short. The 36-year-old actor was presented with one of the evening's first awards for his performance as the boxing coach 'DICkie Eklund' in the DAVID O. RUSSELL movie 'The Fighter'.
As Bale began to wrap up his speech at the star-studded event, he was heard to mumble something to Robert De Niro, who had presented him with the award. However, before he could address the audience again, music began playing and he was cut short. According to the Hollywood Reporter, Bale told journalists back stage that he was just praising De Niro, saying, "I just told him he's the shit. You see an actor of that calibre and Robert Duvall. I don't know if he's here. those guys are the shit. I just wanted to say I'm proud to be in the same room as him". British comedian Ricky Gervais hosted the event and made a number of early controversial jokes, but Bale was keen to hear more, saying, "I hope he's going to keep going further. That's what tonight is all about. Everything's up for a joke".
Bale will soon begin filming the drama movie 'The 13 Woman of Nanjing', before reprising his role as Batman for Christopher Nolan's much anticipated 'The Dark Knight Rises'.