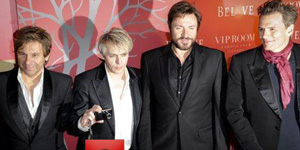 British pop icons Duran Duran have announced that they will open up four of their pre-tour rehearsals to fans at intimate venues across the UK, in advance of their upcoming US September dates and the rescheduled British arena performances that will kick off in late November.

DURAN DURAN, who were forced to cancel a string of UK and European tour dates after lead singer Simon Le Bon developed vocal problems in early May, have, for the first time, turned what will be rehearsals for their American fall tour, into four warm up shows for the fans.

Due to the overwhelming demand, promoters of the shows have now increased capacities at the venues and a limited number of tickets have been made available to the general public.

Lead singer Simon Le Bon is now back in full voice, after a rigorous treatment plan to rehabilitate the muscles controlling his vocal chords, which doctors believed he damaged during a show in Cannes, causing him to temporarily lose the top part of his vocal range.

The four UK shows will be the first time the band have invited their fans into what is essentially an open rehearsal setting, with no production in a very intimate space. DURAN DURAN will then fly to America to kick start the "ALL YOU NEED IS NOW" World Tour on September 23rd in Seattle. The band will return to the UK for a series of twelve arena concerts, starting on 30th November at The Brighton Centre.

"I am absolutely thrilled to be getting back on the road and touring again after my recent vocal injury. It's been an incredibly tough time and extremely frustrating, but after receiving treatment I have made gradual improvements each week in recovering the upper part of my range. I am truly grateful for the incredible support of our fans, the many well wishes and their patience in what has been a difficult time for us all as a band. Inviting the fans into rehearsals before we start our American tour seemed like the perfect opportunity. We are all really excited at the prospect of coming back to the UK in November, we have an incredible production that we've been working on for this tour - and the new songs are sounding great."