'Lego House' singer Ed Sheeran was given a BRIT Award made out of Lego last night (21.02.12) following his double win at the ceremony. 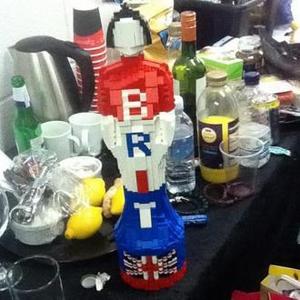 Ed Sheeran was given a BRIT Award made out of Lego last night (21.02.12) following his double win at the ceremony.

The 'Lego House' singer took home the prizes for British Male Solo Artist and Best British Breakthrough and following his triumph, the toy brick-building company sent him a replica of his award.

Ed - who wowed the crowd at London's The O2 with a performance of 'Lego House' - tweeted a picture along with the following caption: ''Lego made me a Brit award. Amazing, thank you Lego!''

Ed was also thrilled with two real Brit Awards he took home and took to his twitter page to thank everyone for their support.

He wrote: ''Had the most amazing night, thank you all so much for everything.''

Before the ceremony, Ed said he was worried he wouldn't win anything at the awards - despite being nominated for four prizes.

Ed - who was also up for Mastercard British Album of the Year and Best Single, which went to Adele and One Direction respectively - said: ''There is a lot of good competition. I have a feeling Adele will win the album prize and One Direction will get Best Single. Then it will be a toss-up between me and Noel Gallagher for Male and between me and Jessie J for Best Breakthrough. It's hard to rate my chances.''