Ellie Goulding and Jeremy Irvine put on a public display of affection at the Universal BRITs after-party last night (20.02.13), by sharing a kiss in the middle of the dancefloor at members' club Soho House in London. 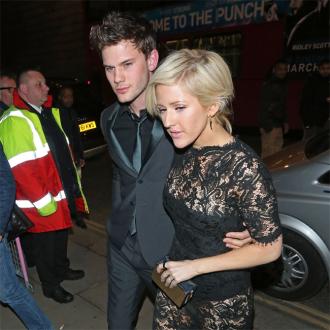 The 'Anything Could Happen' hitmaker and 'War Horse' star have yet to officially comment on their relationship status but locked lips in the middle of the dancefloor at the Universal BRITs Party at Soho House in London.

Other famous names at the exclusive bash included Taylor Swift - who performed her track 'I Knew You Were Trouble' at the ceremony at The O2 - and actress Carey Mulligan, who the loved up pair talked and laughed with throughout the night.

Ellie, Jeremy and Taylor then jumped into the DJ booth with BRITs host James Corden as he took to the decks to for his own set.

The 26-year-old beauty is rumoured to have been dating the heartthrob actor since last October - a month after she ended her seven-month relationship with DJ Skrillex as the couldn't make their long-distance romance work.

Earlier this week, Ellie and Jeremy arrived at London's Heathrow Airport with their arms wrapped around one another after flying over from Los Angeles for the prestigious music awards.

Ellie posted a photograph on her Instagram account of Jeremy sat next to her on the plane, with a caption reading: ''My plane mate tonight #megababe (sic)''