Actress Eva Longoria Has Spoken Out To Clear Up Reports Suggesting She Compared Under-fire Tycoon Donald Trump To Nazi Dictator Adolf Hitler At A Recent Event, Insisting Her Comments Have Been "Dramatically Mis-characterized". 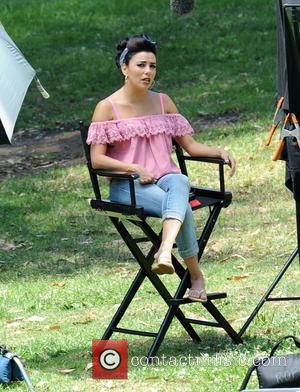 The former Desperate Housewives star was among the many Latin celebrities who were stunned and appalled by property mogul-turned-reality TV boss Trump's disparaging remarks about Mexican immigrants in America during his recent U.S. presidential campaign launch.

Longoria was hesitant to discuss the controversy at the National Association of Latino Independent Producers (NALIP) Media Summit luncheon in Hollywood last week (26Jun15), when she told attendees, "I think what he doesn't understand and what people don't understand is words create emotional poison. Hitler moved a nation with words. Just words. And so you have to expect this backlash if you say something like that.

"You must expect a backlash because it's struck a chord in our community that touched our emotions so deep, that I don't want to contribute to that poison being spread. Because if I contribute, then it's just going to bring more attention to the original comments."

However, the actress ended up facing criticism herself for her statements, which only surfaced online on Wednesday (01Jul15), prompting her to take to social media to clarify what she said.

She writes, "My statement has been dramatically mis-characterized. I'm not comparing anyone. Of course I'm NOT saying Donald Trump himself is dangerous, but that WORDS can be dangerous. I was referring to the quote 'The word is so powerful that one word can change a life or destroy the lives of millions'."

In his remarks about America's immigration problems, Trump suggested many Mexicans living in the U.S. are "rapists" who have brought drugs and crime with them. His comments have led to TV network bosses at Televisa, NBC and Univision pulling the plug on their planned coverage of his Miss USA pageant later this month (Jul15). They have also cost him a lucrative deal with retail giant MACy's.