Eva Longoria was left red-faced when she hitched up her dress on the red carpet in Cannes, accidentally revealing she wasn't wearing any underwear. 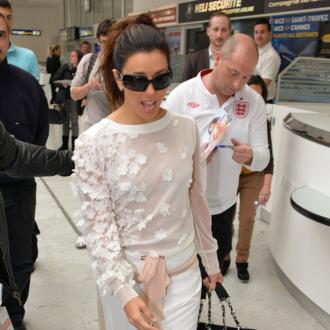 The 'Desperate Housewives' star accidentally revealed much more than she bargained for while walking the red carpet at the 'Jimmy P. (Psychotherapy Of A Plains Indian)' film screening on Saturday night (18.05.13).

Eva, who looked stunning in a pastel green gown complete with a plunging side-split, hitched up her dress to avoid the puddles, flashing much more than just her legs in the process - since she had decided to go commando.

The 38-year-old actress appeared unaware of the incident and was happy to pose for the cameras in the rain.

She later enthused on her Twitter page: ''My favorite red carpet of the whole year!''

Eva also shared a series of snaps of her fellow celebrity L'Oreal beauty ambassadors Jane Fonda, Cheryl Cole, Megan Gale and Doutzen Kroes, who all braved the bad weather for the annual film festival in the South of France.

The Latina bombshell and her British counterpart Cheryl appeared to get on famously, and the pair couldn't get over how similar they looked.

Eva wrote on the social networking site, ''Me and my twin sister @cherylcole at Cannes!', with Cheryl re-posting the message and adding, ''It was like looking at a prettier reflection, ha!''