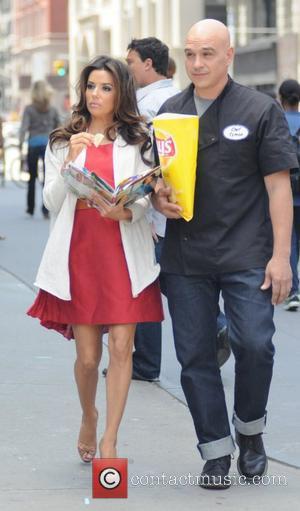 Eva Longoria is reportedly getting close to the New York Jets quarterback Mark Sanchez. According to In Touch Weekly, the former Desperate Housewives actress had been keeping the relationship on the down-low, even going as far as wearing a blonde wig during a date at New York's Hotel Griffou.
An insider - who spotted Eva and mark shopping at Kings supermarket in New Jersey - said, "It looks like they're testing the waters". As for their secretive date at the New York Hotel, the couple reportedly looked very comfortable with each other, with one eyewitness saying, "They were laughing and having a great time". Sanchez - who was most recently linked to Sports Illustrated model Kate Upton - has also whisked Longoria away for an island-hopping holiday in the Caribbean. The actress' representative recently confirmed her split from the Spanish singer Eduardo Cruz, whom she began dating in 2011 following the breakdown of her marriage to Tony Parker. The basketball star was also in the headlines recently, after reportedly getting caught up in an alleged brawl at the WIP nightclub in New York, between Chris Brown and rival Drake.
After 'Desperate Housewives' came to an end earlier this year, Longoria has been working on numerous film projects, including 'Long Time Gone' about a broken family who find their relationship to one another changed by a new arrival in the household.