Hal Return With New Album 'The Time, The Hour'

Posted in Press Releases on 07 February 2011 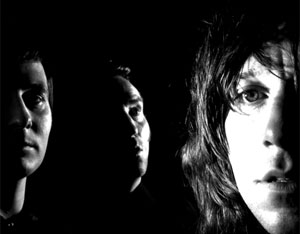 Hal Return With New Album 'The Time, The Hour'

Dublin 3-piece, Hal, formed in 2003 and were signed by Geoff Travis to Rough Trade Records in 2004. Their eponymous debut album was produced by Tears for Fears, Ian Stanley, and released to critical acclaim in 2005, producing two UK and Irish top 40 chart hits.

The band toured worldwide during 2004/05, enjoying extensive television & radio promotion all over Europe, and performing headline and support shows with the likes of the Doves, The Thrills and Brendan Benson. Finding particular success in France, they were awarded an EBBA (European Border Breakers Award) for most debut record sales outside their home nation, and 'Best Album of 2005' in French Magazine 'Music'. Back home they won 'Album of 2005' in the Irish Independent, and 'Best Newcomers' in the Irish Post, as well earning nominations for the Choice Music Prize and 'Best Band of 2005' at the Meteor Awards. In 2007, suffering writers block, singer David Allen quit the band and left Ireland. He returned in 2008, with a large collection of new songs, having spent nearly 2 years travelling Europe and the States with only his guitar for company, playing in various pubs and clubs, and indulging in a different pseudonym for each performance.

During this time Stephen, the band's keyboard player, put himself to work building his own recording studio where he has engineered and played on several acclaimed records including Fionn Regan's latest offering, "The Shadow of an Empire" Dave's brother, the band's bass player/backing vocalist, Paul, immersed himself in his other great love-photography as well as penning new songs and musical ideas in the hope that they would one-day reform Hal.And so on Dave's return to Ireland, they did just that and began sifting through material to begin work on Hal's second record. The band spent 2010 recording and 2011 will see the band return to the live arena and long-awaited release of second album, "The Time, The Hour".

Hal - Worry About the Wind