Sir Ian McKellen Has Written A Lengthy Tribute To Late Actor Sir Christopher Lee And Reminisced About Their Time Together On The Set Of The Lord Of The Rings Films. 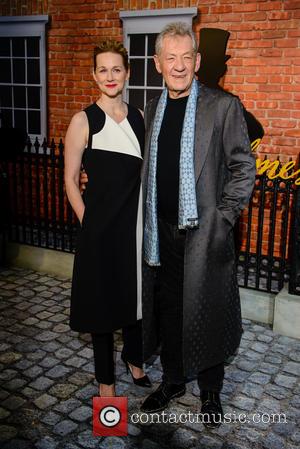 Movie legend Lee passed away on Sunday (07Jun15) at the age of 93 following treatment for heart failure and breathing problems, and his death prompted an outpouring of grief from across the movie industry.

His longtime co-star MCKellen, who played wizard Gandalf opposite Lee as Saruman in the fantasy trilogy and The Hobbit films, has now written about his memories of the actor in a tribute posted online.

In the piece, MCKellen reveals that despite his lengthy acting career, Lee was nervous when he first took on the wizard role. He writes, "Touchingly, he was a little nervous at the outset. 'Peter (Jackson, director) made me do my first speech 10 times!!' But I told him not to worry, as the previous day I'd had to repeat a scene 27 times. His dark eyes widened and glinted but he didn't complain again. Peter was tickled to have his Hammer Horror hero as the villain."

He goes on to reveal the last scene in which their characters appear together was actually shot apart with MCKellen in New Zealand and Lee in London, while the actor also claims Lee was determined to remain "fit for purpose" as he continued acting in his twilight years, adding, "When he joined the Star Wars cast, he said he did all his own stunts without benefit of a stand-in. That certainly wasn't true of his gravity-defying fight with Gandalf. I suspect he just wanted to declare he was in old age fit for purpose. He needn't have worried. His acting prowess never declined."