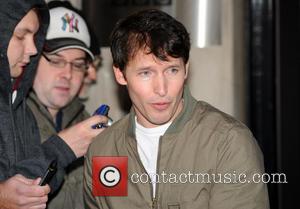 British singer James Blunt moved back in with Star Wars icon Carrie Fisher at her Los Angeles home to record his latest album.

The You're Beautiful hitmaker recorded his 2004 breakthrough Back to Bedlam at the actress' California residence, and she welcomed him back while he was working on Moon Landing as he attempted to recreate the magic of his first ever release.

He tells Britain's Daily Mirror, "She's like my American mum. I met her in a restaurant in London years ago before moving out to L.A. and she invited me to stay with her to write the first album.

"I've tried to go back to the indie feeling of that record, not only stripping things back to basics, but by staying with her again. She's really great."

Fisher gave Blunt plenty of input as he was writing his new material, and he has repaid her kindness by jokingly crediting her as his "housekeeper" in the album's liner notes.

He adds, "I'd come in at night, and find her lying on the bed writing. I'd then play her songs and she'd tell me what she liked and what should or shouldn't be included. The next day I'd go out and make the changes she'd suggest."