Jamie Bell Opens Up About Sex In Saucy Interview 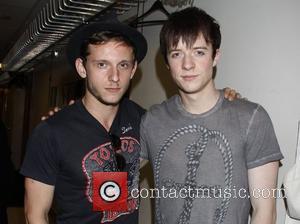 Picture: Jamie Bell and Matthew James Thomas Backstage at the Broadway musical production of 'Spider-Man Turn Off The Dark' at the Foxwoods Theatre New York City,...

British actor Jamie Bell has opened up about his sex life in a raunchy new interview, insisting the best way for a man to impress a woman is to be good in bed.
The former child star, who is currently dating actress Evan Rachel Wood, sat down for a saucy chat with Britain's GQ magazine and discussed his sexual prowess.
When asked about the best way to impress a date, Bell replied, "Buy her flowers? Take her home on the weekend to meet your mother? No. Let's cut to the primal - be good in the sack. Have an understanding of what's going on down there and have fun, awesome sex."
He adds, "A man should have a good understanding of a vagina. He should be good at oral sex. On a woman... Making fires and pleasing a woman. In the vaginal area."
Bell also reveals Hollywood actor Russell Crowe gave him an important tip, adding, "The best piece of advice I ever received was 'Don't f**k your publicist'. Russell Crowe told me that. It's probably a smart move."

Jamie Bell Urges Reporter To Stay Away From His Mum