Northern Irish Actor Jamie Dornan Is Showing Off His Golf Skills By Playing In A High Profile Tournament. 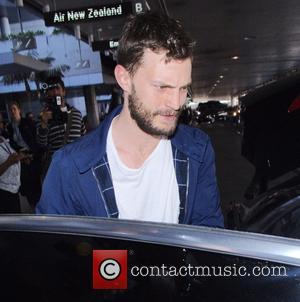 The Fifty Shades of Grey star is taking part in the Dunhill Links Championship, which teams professional players with an amateur partner.

He has been paired with U.S. sportsman Peter Uihlein.

Jamie played the first round at the St Andrews course in Scotland on Thursday (01Oct15), and he enjoyed huge success on the opening day, scoring two under par on one hole.

Video footage posted online shows the actor taking the final shot then dropping his club in delight when he sinks the ball.

Speaking afterwards, Jamie admitted that he was disappointed his longtime friend, golf star Rory MCIlroy, was not present to see him take the shot.

"It's a shame Rory wasn't here to see that," he said of the impressive put. "But I'll be texting him to let him know."

Other celebrity golf enthusiasts to have previously played in the tournament include Michael Douglas, Samuel L. Jackson and Hugh Grant.