Jared Leto also revealed that his Oscar is safe-guarded "by some vegan butter and a bag of popcorn," in his kitchen. 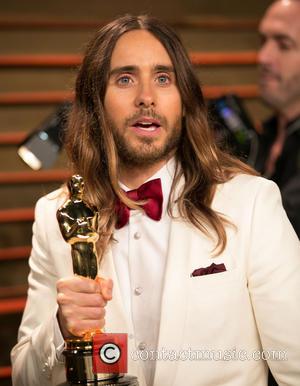 It was only days ago that Jared Leto was honored at the 86th annual Academy-Awards.

The 43 year-old was prized with the Best Supporting Actor Oscar for his role as an HIV-positive transgender woman, Rayon, in 'Dallas Buyers Club'.

Although the golden statue is said to be a priceless accolade, Leto may have to empty his wallet for repair costs, as he has already admitted to damaging it.

The Thirty Seconds To Mars frontman made the admission while being interviewed by ET Canada, when discussing details of his new golden boy.

"True story: I was letting some of the people that I work with take a picture with the Oscar, and I was carrying downstairs and boom - I hit the railing on the stairs and I put a little nick in the back of it. so you know, that's how it goes. It's already lived in, as they say." he said.

When divulging the location of the Oscar, many would be surprised where Leto chose to place the coveted award in his home.

"The Oscar is sitting in my kitchen, guarded by some vegan butter and a bag of popcorn!" he revealed. "You know, they kind of end up in the kitchen because that's the first place that I go when I get home. You put your keys down and you take off your jacket. and you put your Oscar in the kitchen."

Another intriguing fact about Leto is that even though himself, and his co-star Matthew McConaughey (Best Actor) were both victorious for their roles in the 'Dallas Buyers Club', he still hasn't seen the film.

While appearing on 'The Ellen DeGeneres Show' this past Monday (March 3rd), Jared said he hasn't seen 'Dallas Buyers Club' because "it was such an intense role. It's better for me to just leave it alone right now."