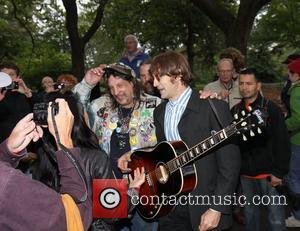 Jarvis Cocker has reviewed the latest book to be have been published about The Beatles. 'The John Lennon Letters', edited by Hunter Davies, is a collection of missives from the late Beatles’ songwriter, dating from between 1951 and 1980. Cocker questions the real value in these pop history artefacts, drawing attention to the fact that the source material was largely sourced from private collections; from people who have paid vast sums of money to own a piece of Lennon’s personal history and the former Pulp singer asks whether the books say more about the culture of collecting pop memorabilia than the words of the letters can ever say themselves.

“I love the Beatles. I haven't named any kids after them but I still really love them,” says Cocker and he painfully recalls the way in which the ‘Britpop’ era was damaged by that very nostalgia that permeates collections such as this. “Wearing the same clothes and taking the same drugs will not make us into Beatles. It will make us fat and ill. And books like this (along with many others, I admit) are what make that mistake possible. The Beatles didn't know they were the Beatles. The Beatles didn't have a plan or a blueprint to follow. They followed their impulses and vague hunches and somehow left a legacy of 213 songs with scarcely a dud among them. That's all the information you need, really.”

In essence, Cocker describes the hoarde of surviving Beatles fans as “the children of the echo” and suggests that we should all “get a life” and “move on,” rather than obsessing over trivia such as is contained herein.