Review of Born and Raised Album by John Mayer

John Mayer's fifth studio album is very much a back to basics affair, full of nostalgia, introspection and dreamy melodies. It's also the album that Mayer needed to make at this point in his career. Following the often bitter observations of 2009's Battle Studies, some very public criticism following a couple of candid interviews, and medical issues that have prevented him touring so far in 2012, Mayer's new album is by no means a guaranteed success. But Born and Raised is ultimately satisfying because it feels in many ways as if he's wiping the slate clean.

As you'd expect from the cover art of the record (interestingly the first of his not to be a photo, nor feature Mayer himself) it's an homage to classic rock of the seventies with a country twist. He wears his influences on his sleeve too, name checking Neil Young on opener 'Queen of California' along with Joni Mitchell ("Joni wrote Blue in a house by the sea, I gotta believe there's another colour waitin' on me"). Musically the track shares some affinity to Rumours era Fleetwood Mac with laid back guitar and piano solos nestling among Mayer's warm vocals. It's nostalgic, but brimming with hope, showing an absence of the bittersweet blues that has overshadowed some of his previous work. 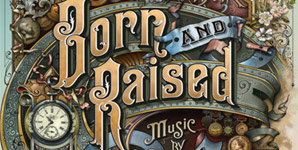 Much of the material here also lays bare an inner monologue. Mayer is reflecting upon his teenage self with the regrets that come with hindsight (The 'Age of Worry'). The conclusion he comes to is somewhat more triumphant though. Especially when he declares on lead single 'Shadow Days', "Hard times have helped me see, I'm a good man with a good heart, had a tough time, got a rough start, but I finally learnt to let it go". Depending on how much you want to read into the lyrics, it's the logical choice as an introduction to the album. Mayer is presenting himself in a new light and putting old ghosts to rest, he's no longer the womaniser we might have expected either ("It's nice to make some love that I can finally feel").

There is an undercurrent of loneliness that seeps into much of the album too, from Mayer blocking out the world with his headphones on 'Queen of California' right through to the surreal character study of 'Walt Grace's Submarine Test, January 1967'. In the latter the subject of the story creates his own homemade mechanical contraption having "buried himself alive in his basement". While the conclusion to the song leaves you to wonder quite how successful Walt has been in his endeavours, it's a solitary journey that echoes the solitude of the decidedly more autobiographical 'Whiskey, Whiskey, Whiskey'. Here Mayer reflects on yet more of the mistakes of his youth - "walking home with no one left" - but taken in the context of the rest of Born and Raised, he seems to have moved past the booze and sleep cycle the song illustrates.

No John Mayer record would be complete without a cleverly phrased love song, and here that accolade goes to 'Love Is a Verb'. It's also the most forward-looking song on the album too, as he urges an unnamed partner to, "show me that love is a verb". While much of Born and Raised is concerned with a new perspective on his youth, it's also Mayer's most grown up record as he makes peace with his younger self. It's not a record full of big musical statements, but neither does it need to be. It's relaxed and pleasantly familiar as it harks back to the Californian sound of the seventies, without sounding like a pastiche of his musical heroes. If this is the John Mayer that's returned from a self imposed wilderness, in many ways he's far more interesting to listen to than he's ever been.