John Mayer accidentally drops the f-bomb while him and girlfriend Katy Perry conduct their first joint interview to discuss their duet 'Who You Love'. 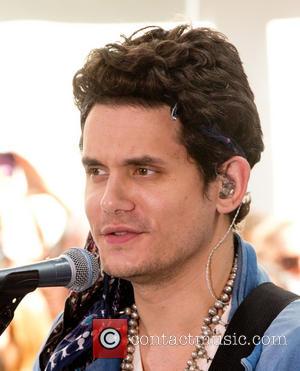 John Mayer and Katy Perry have been in a relationship since 2012 but it has been on and off this past year.

The pair temporarily separated for a short time in August 2012 and again in March 2013, but since then they seem happier than ever.

In Their first joint television interview, Perry and Mayer, spoke with 'Good Morning America' about their new duet titled 'Who You Love'.

Mayer kicked-off the interview by discussing how a joint single came to fruition.

"I had this little chorus for years. And it was 'You love who you love' and I thought that was always going to be a great thing someday to have a song that people could hear and feel that sort of permission," he explained.

"And then it came out again and sometimes you just have to play stuff for other people.and I played it for Don Was, the producer of the record, and he went, 'That's something' and I said, 'I don't know' and then he said, 'Why don't you get Katy to do it?'"

The 36 year-old did make it clear that the song was not publicity stunt, the motivation for the rack was purely about the music and nothing else. "For me it always had to be about the song. It's a pretty big moving target to be a couple and have a song but I think there's an authenticity to it when you hear it," he reiterated.

Katy also jumped in to back up her man, stating, "It transcends us, it's more about the message of the song."

Watch the 'Who You Love' music video below

However, Mayer nearly ruined their first TV interview together by dropping an f-bomb, but luckily not many people caught on to the profanity used.

While speaking about being in the studio with the 'Roar' singer he said, "I come in the studio and she plays stuff and I go," he said, putting his hand over his mouth. "And then I'll hear a melody, cause she'll be writing something, I'll hear a melody and I'll be like, 'Don't! Don't!' She was f--king..." he added before abruptly stopping in his tracks.

It is a good job it was a joint interview as Perry recognised the slip-up and quickly began talking where her man left off.

They finished the interview by airing the music video for their new track on the morning show.