Depp's Tonto To Be As Eye-catching As Jack Sparrow 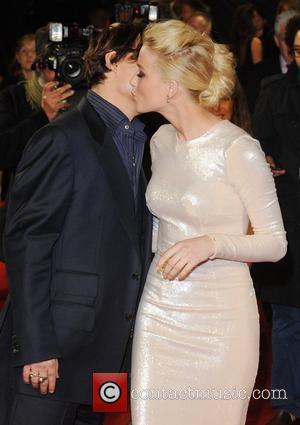 Johnny Depp is likely to touch off another Indian war when the next Lone Ranger movie, in which he plays Tonto, is released next year. First of all, there's Tonto's costume, which includes a headdress that features a stuffed blackbird looking as if it's in flight. Depp has told Entertainment Weekly that he himself created the headdress, inspired by a portrait of an Indian by artist Kirby Sattler in which several birds fly behind his subject, including one behind his head. "It looked to me like it was sitting on top," Depp said in the EW interview. "I thought, Tonto's got a bird on his head. It's his spirit guide in a way. It's dead to others, but it's not dead to him." (Depp does not indicate in the interview whether he also assumed that Tonto imbibed mescaline or peyote.) Then there's Depp's white facial makeup featuring two stripes running from forehead to chin on each side of his face. That too, he explained, comes from the Sattler portrait. "It seemed to me like you could almost see the separate sections of the individual," Depp explained, begging an explanation. And finally, he said, he does not intend to portray Tonto as the Lone Ranger's "faithful Indian companion," noting "The whole reason I wanted to play Tonto is to try to [mess] around with the stereotype of the American Indian that has been laid out through history, or the history of cinema at the very least -- especially Tonto as the sidekick, the Lone Ranger's assistant. ... As you'll see, it's most definitely not that."