Don Lemon: Putting the world to rights by arguing with Jonah Hill via Twitter 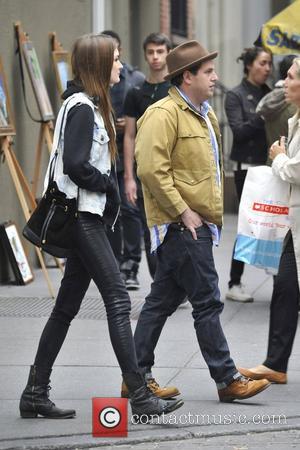 Picture: Jonah Hill is seen out and about with a friend in Soho, Manhattan New York City, USA - 24.10.12

Don Lemon took to Twitter recently to air his irritation with Jonah Hill, after Hill was not utterly overawed and enamoured in his brief, hotel lobby meeting with Lemon.


Don Lemon is an outspoken and award winning news anchor with CNN and has done reports on Hurricane Katrina, the African Aids Epidemic and even won the Edward R. Murrow award for his work on the Beltway sniper attacks. With that kind of journalistic record under his belt, to take to Twitter in a feud seems really odd. Jonah Hill is the Superbad funny-man who has forged a very successful career for himself, branching out of comedy in Moneyball  as well as producing and writing 21 Jump Street. Lemon's tweet to Jonah reads:

Said hi to @jonahhill in hotel. Think he thought i was bellman. Didn't know his name til bellman told me. A lesson to always be kind.

Jonah Hill responded, saying "I said hi. What do you want me to do, move in with you? I was in a hurry. Didn't realize you were a 12 year old girl. Peace." according to USA Today (the original tweet has been deleted). Lemon responded again "@JonahHill Hardly. You're not my type. But I know rude. And u were." Anyway, enough of this he-said-she-said business, this entire feud is ridiculous.

Speaking on CNN Lemon referred to the spat between them. "He treated me like the help," he said. If being rude is how a person treats 'the help' then, Mr Lemon, how do you treat 'the help'? Are 'the help' any less important than you? Do 'the help' deserve less respect than you? The answer is no, Mr Lemon. Perhaps the CNN anchor is simply not used to being ignored, but y;know what? Sometimes that's okay. Sometimes people are in a rush. Sometimes people are in a bad mood. Sometimes people who are bombarded every day by people they don't know, don't like it. That's okay. Yes, Jonah, heed the message- politeness is great. Also note: cleanliness is close to godliness and manners don't cost anything. Lemon's been taught by his own mother to "always be kind to people", apparently that doesn't extend to Twitter.

Here's what Don Lemon had to say on the matter: