Thanks For The Thumbs-Down: Julianne Moore’s Message For Sarah Palin at Emmys 2012 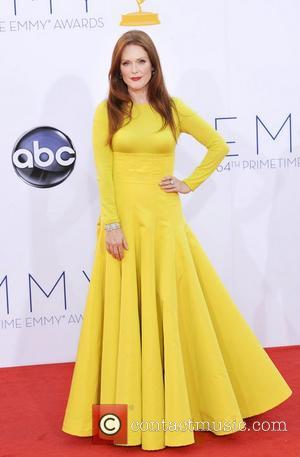 When Julianne Moore collected her Emmy Award last night (September 23, 2012), she had a message for Sarah Palin, the woman whose character she played in the political drama Game Change. The Julianne Moore Emmy win was one of the evening's highlights, as she collected the gong and told the audience “I feel so validated since Sarah Palin gave me a big thumbs down.” In a night that was rife with political commentary, Moore added that Game Change “isn't as much about Palin as the political process and in an election year, this was an examination of how we pick our leaders.”

It’s election year in the United States and the forthcoming election was never far from the topic of conversation. Jimmy Kimmel hosted the annual TV awards show – considered by many to be the Oscars of the small screen – and he was quick to bring election talk to the fore. “Are any of you voting for Mitt Romney? Oh good, only 40 Republicans, and the rest godless liberal homosexuals... Being a Republican in Hollywood is like being a Chick-fil-A sandwich on the snack table at Glee,” he joked, according to Fox News.

Game Change won four Emmys in total and it wasn’t the only politically-charged drama to win big, either. Homeland – the national security drama – made winners of its two lead stars, Claire Danes and Damian Lewis as well as taking home the Outstanding Drama Series award.