Pop Star Justin Timberlake Was Honoured For His Fashion Business At A Glitzy Gala In New York City On Thursday Night (22oct15). 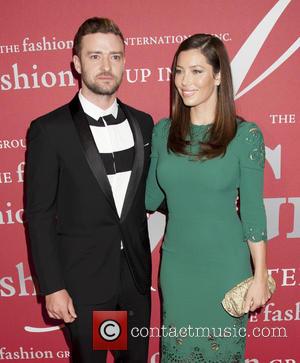 Justin received the honour for his work on William Rast, the clothing label he set up in 2005 which is sold at U.S. department store Lord & Taylor.

He was joined at the event by his wife, actress Jessica Biel, and other fashion-forward stars including Katie Holmes, Diane Kruger, Michelle Monaghan, Meryl Streep, Zachary Quinto and Girls actress Allison Williams.

Other awards were given out to a host of designers and fashion brands, including Jason Wu, who was honoured by Diane, and Lanvin designer Alber Elbaz, who received his prize from Hollywood legend Meryl.

Justin set up his William Rast brand with his friend Trace Ayala, naming the company after their grandfathers, and one of their leading products is a denim line.

"Ask any American and they will tell you that you are never too old to wear jeans, but there are rules you need to stick to, whether you're a boy or a girl," the singer previously said of his denim range. "They shouldn't be so loose that you can fit twins in there, or so tight that you can see the shape of your calves. And if you're going to dress them up with nice shoes and a jacket, the socks have got to be good - don't go teaming them with plain old white sports socks."

They recently announced singer Tori Kelly as the face of the womenswear line and she declared she was excited to be William Rast's new ambassador.

"I'm so thrilled to be partnering up with William Rast," she said. "I'm such a fan of the brand and being a part of the new campaign has been amazing."