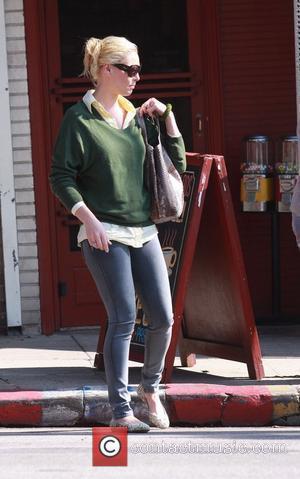 Picture: Katherine Heigl in a green loose jumper and tight jeans out and about in Los Feliz. Los Angeles, California - 17.11.10

Katherine Heigl is set to replace Halle Berry in the forthcoming movie 'New Year's Eve'.
KATHERINE HEIGL, the 32-year-old American actress and star of 'Knocked Up' is replacing HALLE BERRY in Garry Marshall's star-studded romantic-comedy 'New Year's Eve, according to US Weekly.
Berry is currently seeking "swift judicial intervention" in a case concerning the custody of her 2-year-old daughter 'Nahla', however, the exact reason for her leaving the project remains unclear. Heigl's inclusion in 'New Year's Eve' will see her reunite with 'Killers' co-star Ashton Kutcher and she will also star alongside Sarah Jessica Parker, SETH MEYERS, Jessica Biel, Robert De Niro and HILARY SWAN. The film is regarded as being a sequel to Marshall's successful 'Valentines Day', which grossed over $110 million at the box office.
It was reported earlier this week that film bosses are currently in negotiations with television personality and radio host Ryan Seacrest to make a cameo in the movie.