The 7 months pregnant Kardashian recently took a break from everything in Greece. 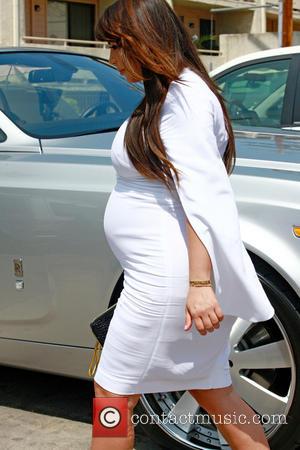 After grueling criticism of her pregnancy shape and her outfit choices, Kim Kardashian seems to finally be coming to terms with her new body. The star recently chilled out in Greece along with her family and, in the Hollyday snaps, she definitely looks her happiest, and healthiest, in a variety of two-piece bikinis. It’s no secret that the “Keeping Up with the Kardashians” star has been having trouble dressing her new shape and she’s received a lot of negative attention for it. The 32-year-old star opened up about her struggles to adjust to the changes in a recent tweet, writing: 'I struggle finding things that don't make me look heavy.'

She finally looked at ease on her holiday, though, as The Daily Mail reports. Sunshine and rest do seem to have that effect, but it probably had something to do with the company the eldest Kardashian kept on vacation, namely her mother, Kris Jenner and her sister, Kourtney. Kim’s family has been extremely supportive throughout, with her other sister, Khloe, having recently jumped to her defense, writing in a letter on the Kardashians’ website: 'I find it disturbing that society loves to critique a woman's shape no matter how beautiful or happy she may be within herself.

'I can not tolerate one more vicious attack on my sister... For anyone to ever criticize a woman who is growing another life inside of her is true scum in my eyes.'

Well, times might be tough, but at least Kim has her family by her side, as ever. Wearing heels is no walk in the park when you're seven months pregnant.