Kim Kardashian reached out to her ex-boyfriend REGGIE BUSH to congratulate him on the birth of his first child earlier this month. 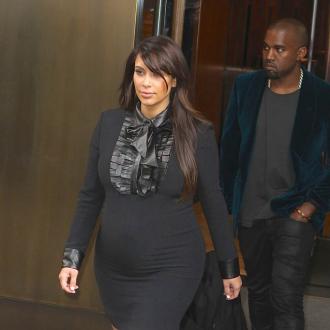 Kim Kardashian congratulated her ex-boyfriend on the birth of his first daughter.

The 32-year-old reality TV star - who is almost eight months pregnant with her own first child with rapper Kanye West - reached out to her former love interest REGGIE BUSH after he and his fiancée Lilit Avagyan welcomed their baby girl, Briseis, into the world earlier this month.

According to gossip website RadarOnline.com: ''Kim sent Reggie a congratulatory message and while Reggie wasn't expecting it, he was very happy that she sent out her well wishes.''

NFL star Reggie, who dated the 'Keeping Up With The Kardashians' star for three years until early 2010, recently told UsMagazine.com that although he is no longer in touch with the brunette beauty, he wishes her well.

Meanwhile, Kim has flown to Paris with her mother Kris Jenner after spending the weekend supporting Kanye, 35, in New York, where he was performing on 'Saturday Night Live (SNL).'

She wrote on her blog: ''I flew to NYC to watch Kanye perform on 'SNL'. It was such a big night for him because he was performing two new songs ('Black Skinhead' and 'New Slaves') off his new album! I really wanted to be there to support him! My mom and I flew in and had a yummy dinner at my fav spot Cipriani with Jonathan and Rushka. Since this will be my last trip to NYC for a while, I had to hit up my fav spots! (sic).''

Kim also revealed she is feeling a lot more confident about her body as her due date approaches.

She added: ''It's funny because people comment saying, 'Don't wear tight things,' but anyone who has been pregnant knows it feels so secure being held in, and wearing something tight and supportive.''