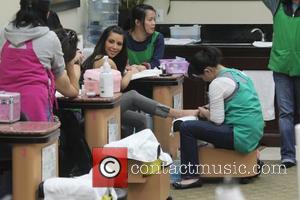 Picture: Kim Kardashian gets a manicure and pedicure at a nail salon in Beverly Hills Los Angeles, California - 02.03.11

Kim Kardashian's debut single 'Jam (Turn It Up)' premiered on Ryan Seacrest's radio show yesterday (2nd March 2011) and a music video is set to follow.
Kim Kardashian has revealed details of the music video to accompany her new single 'Jam (Turn It Up)', which hit the airwaves yesterday.The song, an upbeat dance track, was heralded by fans of the reality star on her Twitter page, but the entertainment press were slightly less than complimentary. The Washington Post were particularly scathing, saying, "For starters, It's been auto-tuned so severely that it may have turned Kardashian's actual vocals inside out and back again. Yet she still sounds off-key", adding, "For another thing, its lyrics appear to have been penned by a third-grader who is writing a short story about what adults do when they go clubbing". The 30-year-old model has revealed details of the song's forthcoming music video, which has been directed by Hype Williams, the man behind Kanye West's acclaimed 'Gold Digger' video. Speaking on her official blog, Kardashian posted several pictures from the shoot, saying, "I swear Hype Williams is the most creative guy I know! He is a genius! He came up with all of the different looks and wanted me to be experiment with looks that I had never tried before"
Kim Kardashian said she had "absolutely nothing" planned in terms of a debut album and noted that profits made from the single would be going to charity.