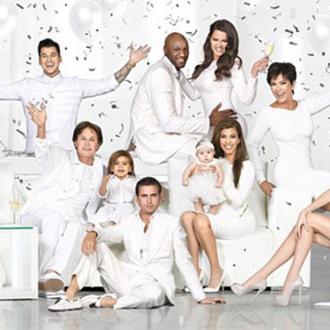 The Kardashian-Jenner clan posed in all white for this year's festive greeting, which saw the additions of two new family members.

Kourtney Kardashian and Scott Disick's six-month-old daughter Penelope Disick made her Christmas card debut, sitting on her mother's lap in a princess dress and floral headband.

The couple were also joined by their three-year-old son Mason, who first appeared in the family card in 2010.

Also appearing in the photograph is Kim Kardashian's late kitten, Mercy, who died of stomach cancer earlier this month.

Completing the Christmas card line-up is Kris and Bruce's daughters, Kendall and Kylie, and Rob Kardashian.

Kim expressed her excitement about the holiday card, writing on her blog: ''Here it is!! Our 2012 family Christmas card shot by the amazing Nick Saglimbeni! We had such a fun time shooting this!''

Despite the 'Keeping Up with the Kardashians' stars appearing to be together in the snap, Khloe recently revealed several family members - including herself, Lamar, Scott and Kendall - had to be digitally added into the picture using Photoshop.

She said: ''We pretend that we're always together. The powers of cameras and Photoshop.''