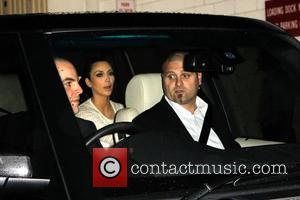 Picture: Kim Kardashian leaves a television studio after being interviewed about her marriage Sydney, Australia - 03.11.11

Kim Kardashian is facing allegations by her previous publicist JONATHON JAXSON that her 72-day whirlwind marriage was a publicity stunt. Jaxson, who worked with the reality star Kim Kardashian between 2007 and 2009, publically told Good Day LA that the wedding had not been "something she wanted to do".
Talking to Good Day LA, Jaxson stated: "Unfortunately they were obligated to honour contracts [with the E! network which had TV rights] otherwise they would have owed a lot of people a lot of money". Furthermore, Jaxson has suggested that the starlet had never got over her NFL-Ex REGGIE BUSH. The couple had dated for around two years before splitting up in July 2009, where two months later they had got back together again only to end it again in March 2010. Jaxson said: "I staged several moments that the world has seen of her, such as a ring that allegedly was from Reggie Bush". In this case, Kim had been spotted wearing a wedding ring in public in 2007: "They had a lot of contracts, they had endorsements. To say they weren't paid is a lot of foolish garbage." Kim's mother, Kris Jenner, has also recently been quoted as saying to FemaleFirst that Kim's first marriage with music producer Damon Thomas in 2000, when Kim was only 19, was also her "going through a phase".
Kim Kardashian is currently hiding from public attention until she has to film her role in the Tyler Perry movie, ironically titled 'The Marriage Counsellor'. The divorce case still continues.