Kim Kardashian West and Kanye West have reportedly banned their 18-month-old daughter North from being filmed for 'Keeping Up with the Kardashians', despite being offered ''big money'' for her to make regular appearances. 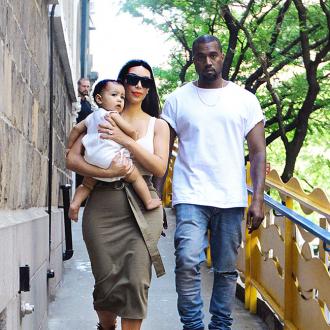 Kim Kardashian West isn't keen on her daughter featuring on 'Keeping Up with the Kardashians'.

The 34-year-old television personality and her husband Kanye West are refusing to allow 18-month-old North from being filmed for the reality show.

A source share: ''It was a no-go from the very beginning because Kim and Kanye made it clear North wasn't going to be up for discussion.

''They want North to have some privacy and be able to be a child away from the cameras.''

This comes just days after it was rumoured that the Kardashian and Jenner family had signed a $100 million deal to extend their contract with E! for four more years.

The couple are also believed to have turned down ''big money'', which was offered to have North feature on the show.

The source said: ''There will be times when North will be included in a group setting, where it's impossible to edit her out.

''She won't be on the show on even a semi-regular basis. E! offered big money to have North included, but her parents turned it down.''

The series - which began in 2007 - is said to be a rating hit, meaning a deal with E! was almost guaranteed.

The insider added to Radar Online: ''Kudos to Kris for scoring a record-setting deal without having to give up much in terms of concessions.

''There was a point during the talks where it seemed E! wasn't going to pay for the massive contract. Kris would have had another deal signed in record time, and E! wasn't going to let that happen. Love or hate the Kardashians, the family continues to do very well in the ratings.''