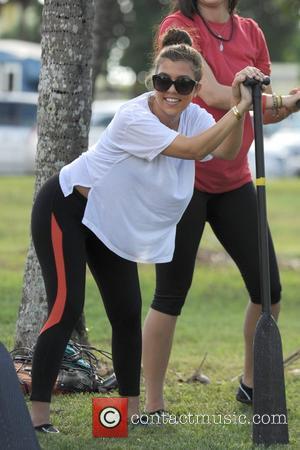 Kourtney Kardashian treated her son Mason to a shopping trip at a Miami toy store on Friday (September 28th 2012). She wasn’t accompanied by her partner Scott Disick this time, though, but by her step-brother Brandon Jenner.

The ‘Keeping Up with the Kardashians’ star seems to be making up for 2-year-old Mason’s lack of attention since her second child, daughter Penelope Scotland, was born earlier this year by splashing out on some brand new play-things at Genius Jones to keep him occupied. The trip was all captured on film by a camera crew who are currently following them around to put together a new spin-off reality series featuring Kourtney and her sister Kim Kardashian called ‘Kourtney & Kim Take Miami’.

On the shopping trip, curvy Kourtney looked picture-perfect as usual, daring to show off her post-baby curves in a sophisticated black and white mini dress teamed with royal blue and turquoise heels while little Mason looked cuter than ever in tiny moccasins, a black shirt and white pants. Mason seemed to go for anything with wheels at the toy store while Kourtney apparently struggled to stay away from designer stores as she was spotted hovering in front of a shelf full of expensive bags.