Security Guards Reportedly Escorted Lamar Odom's Former Aide From The Sportsman's Hospital Floor In Los Angeles After He Was Allegedly Involved In A Disturbance. 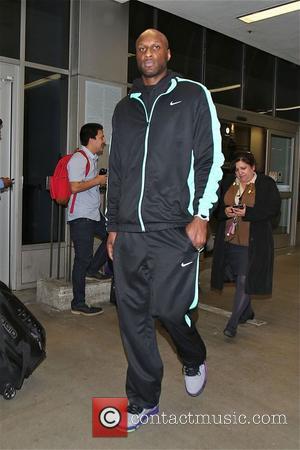 Khloe Kardashian's estranged husband was hospitalised in Las Vegas after being found unconscious at a brothel on 13 October (15). Last week (ends25Oct15), he was transferred to the Cedars-Sinai Medical Center in L.A., where he underwent surgery and is thought to be in a stable condition.

A man attempted to visit Odom in hospital on Monday night (26Oct15) by claiming to be his assistant, who had been summoned by the sportsman. The visitor was reportedly a member of his management team and had been fired when Odom went into hospital.

Security guards refused to let him into Odom's room, and he was escorted out after he yelled and made "a big scene", according to TMZ.com.

Odom had reportedly taken cocaine before he fell unconscious, so police officers obtained a search warrant to take a sample of the 35 year old's blood, and the results have allegedly come back positive for the drug.

Kardashian was not present at the time of the reported disturbance. The reality star has called off her divorce to the former athlete, who she split from in 2013. She took time off from his bedside to attend her sister Kim's baby shower in California on Saturday (24Oct15).