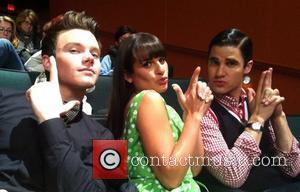 Picture: Lea Michele posted this picture of herself, Chris Colfer, and Darren Criss to Twitter.com with the caption, 'Who wouldn't want to be in between...

Lea Michele and Cory Monteith may play lovers on-screen, but it appears their Glee romance has crossed over to real life too. The stars of Fox's hit musical comedy have never confirmed they are also an item off-screen, but recent photographs of them enjoying a holiday in Mexico suggests they're more than just friends.

According to the UK's Sun newspaper, Lea and Cory were snapped enjoying an outdoor hot tub, with the actress sporting a black bikini. The pair sipped on cocktails as Michele "affectionately stroked" Cory's arm. They were snapped together while on an Easter vacation in the popular resort of Cabo San Lucas - a favorite of Hollywood A-listers wanting to escape Los Angeles. Later in the day, the pair lounged by the pool together, though Cory covered up in a white shirt and played with his iPad. The following day, the couple were snapped flying back to Los Angeles, with Lea tweeting, "Back from another great weekend getaway! Got lots of sun and rest". Rumours earlier this year had suggested Michele was dating the actor Ashton Kutcher following his divorce from wife Demi Moore, though it was found that the pair were just friends having worked together on the movie New Year's Eve.

It is common knowledge that Cory and Lea live together, but during a recent appearance on the CONAN OBRIEN show, Monteith revealed that the pair actually share their apartment with three other men, saying, "It's like Animal House without the motorcycle going down the stairs".