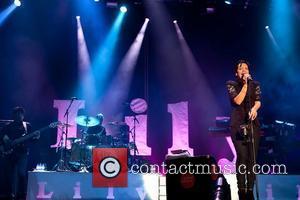 Lily Allen has revealed she hatched a plan to pay tribute to the Spice Girls with Adele, Amy Winehouse, Duffy and Leona Lewis at the 2009 Brit Awards.
The Smile singer thought it would be fun to recreate 'girl power' to open the event with an all-star rendition of the Spice Girls' hit Wannabe - and even offered to don one of Posh Spice Victoria Beckham's tight-fitting outfits for the performance.
She says, "I'd be Posh, Adele would be Ginger, Duffy would be Baby, Leona would be Scary and Amy would be Sporty... She was always the one with the best voice.
"It could've been quite cool."