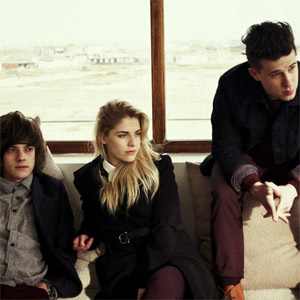 One of the music industry's biggest breakthrough success stories this year has been the rise of London Grammar. The capital based trio, initially formed at Nottingham University in 2009, have released one of 2013's most astonishing debuts in the shape of 'If You Wait'.

Comprised of Hannah Reid (vocals), Dot Major (keyboards, drums) and Dan Rothman (guitars), their stylish collision of ambient beats, folk infused melodies and soulful vocals have drawn comparisons with artists ranging from The xx and Lana Del Rey to Everything But The Girl and Judie Tzuke.

Having wowed audiences at numerous festivals throughout the summer, Contactmusic caught up with the band post-set at Festival No. 6 in Portmeirion.

You've just played to a packed out tent here today as you did at Bestival the weekend before.  Are you surprised at the response you've been getting?
Hannah: It has been nuts! From the time when things started to kick off, it's difficult to gain a perspective as to how far everything's progressed. It's like we're in our own little nucleus playing show after show. But then, a few weeks after the album was released, we noticed our shows were getting busier.

Dot: That was definitely the point where we sensed things changing. When 'Wasting My Young Years' got into the charts and then 'Strong' started getting played on the radio, you could see things had started building. From that point onwards culminating in what we've just seen out there today, I think we're all really shocked by it.

And now your album's set to go into the charts at number two tomorrow as well. What would you describe as your main highlight so far this year?
Hannah: Glastonbury. That was a turning point show. To play there was an achievement in itself anyway, but then to be told afterwards people were queuing outside to get in the tent was just crazy.

Dan: Since then, we've had a lot more people at our shows. I think that created a vibe around us. I remember saying to Hannah and Dot before that Glastonbury does get quite busy because it's such a big festival, but then for it to actually happen for us was unbelievable. I'd seen people play on that stage in 2011, so for us to be up there playing to a packed tent was difficult to take in.

Your album 'If You Wait' has received glowing reviews from just about every publication. Were you expecting that kind of reaction? Do you pay much attention to reviews?
Hannah: I think where there is a lot of hype or anticipation around your album it can actually generate a lot of hate or bad reviews. If something's shoved in people's faces too much it can provoke a negative response, so I guess we've been really lucky so far.

Dot: I don't pay too much attention to it if I'm honest, although there are certain publications that we're quite pleased to get recognised by.

You were also one of the bookmakers' favourites to win the Mercury Music Prize only to end up not being nominated, which seemed quite bizarre. How do you feel about that?
Dan: It's funny because I think, before any of this happened, it was definitely something we'd thought about. I'd be lying if I said we hadn't. But then since the actual moment when the nominations were announced, loads more great stuff's happened anyway so, in a way, it's taken that weight off our shoulders.

Hannah: Well, the thing is, it was a bit weird to be tipped to win it weeks before the nominations were even announced, and then on the day they were we were a bit disappointed not to be on the list but.

Dot: . I don't know, I was the one that really didn't expect it at all. And to be honest, when you see the list of artists that have been nominated, they're all far more established than we are. In a way, you could even argue a lot of those artists are more deserving of their nominations - not that I'm saying new bands shouldn't get nominated - than we are. I think there's something like seven previous nominees from the twelve on the shortlist or something. I'm happy Jon Hopkins got nominated. That was a big thing for me because, for someone like him to be placed against artists who've maybe achieved more in terms of sales, is a huge achievement and one that will hopefully grant him more recognition in the future, especially if he wins.

You've been compared to artists like The xx and Everything But The Girl, which perhaps only tells half the story considering Hannah's folk-influenced background and the more electronic elements of your sound. Are you all inspired by different artists? How is everything brought together?
Dan: It's interesting because I've only started listening to certain artists since we've been compared with them! We're all influenced by very different things.

Dot: I'll listen to something like Beirut, Hannah will be inspired by classic soul singers.

Hannah: We do have different influences. We do crossover though, although mainly we cross over on London Grammar. But it does seem to work.

Dan: There are some bands we all love; Fleetwood Mac, Alt-J, Radiohead, The National. Just probably less than there are that we love individually.

Your live set includes a cover of Chris Isaak's 'Wicked Game'. Is that something you've been playing for a while?
Hannah: We had to do a cover, and we stumbled across it. Everyone really liked it so we've been playing it at shows ever since.

Dan: It's been going down great at festivals.

You first met and formed at Nottingham University four years ago. Was it a key factor in the band gaining widespread recognition to move away from Nottingham to London? For example, other bands have done the same in recent years. Childhood being one that springs to mind.

Dan: It's really weird. There's this guy in Childhood that I studied philosophy and sat in lectures with, yet we never spoke. I didn't really know him, but used to see him around. And then I saw his picture in the NME one week and thought, "F***, we're both in bands now!" I think Nottingham was amazing for us. Not just the University but the city as a whole. There's a good music scene and plenty of places for young bands to play. During our time there the scene was growing, and then there's also a good base for electronic music there as well.

There was a lot of controversy the other week over a comment that was put on the Radio 1 website asking its audience to Tweet in if they think "the singer from London Grammar is fit." Other artists such as MJ from Hookworms have been quite vocal about sexism still being prevalent in the music industry. In light of those comments and observations, does it feel as though Hannah is being objectified by certain sections of the industry?
Hannah: Well, I could probably write a book as an answer to this question! Sexism is everywhere. I think the comment was really meant to be harmless. Unfortunately, I think they just put it in a very sexist way by adding, "Text in if you agree." Having said that, Dot has been objectified. He's been compared to Harry Styles, bless him! But going back to the original question, it was sexist and unnecessary.

Dot: At the same time, things do get blown out of all proportion which is inevitable and what happens is a few people have very honest opinions on it and then a million people form their own second-hand opinions because they didn't actually see what it was. It's almost like a word of mouth domino effect.

Hannah: Although, when it's on somewhere like Twitter you can see what it was because people will retweet it.

Dot: But even then it still isn't a natural reaction. It's more of a reaction to a reaction.