The 17 year-old songstress finally met the baseball player from the National Geographic photo she used as inspiration when writing 'Royals.' 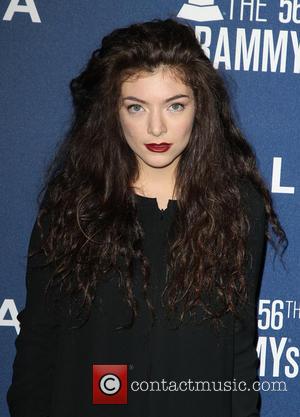 But when the New Zealand native was writing the No.1 track, she wasn't thinking about certain individuals' bloodlines like England's Prince William and Prince Harry's.

"And now you're Royal. @lordemusic meets @Royals icon George Brett," MLB tweeted on Wednesday, along with a photograph of the pair.

Last November the 17 year-old songstress explained to VH1, "I had this image from the National Geographic of this dude just signing baseballs. He was a baseball player and his shirt said, 'Royals.'"

The image made such an impact on Lorde, she immediately wrote a song based on the word that was written on his uniform.

"I really love that word," she continued. "I'll pick a word and I'll pen an idea to that. It was just that word that I was like, ''this is really cool.'"

However the 'Pure Heroine' hit maker, who is a huge history buff, did admit the royal family was also in mind when she was creating the song.

"Obviously I've had this fascination with aristocracy my whole life," she added. "Like, the kings and queens of 500 years ago.they're like rock stars. If there was a TMZ 500 years ago, it would be about like Henry VIII and Marie Antoinette and all those people."

The picture she is referring to is of Brett in 1976, who was photographed meeting fans outside the stadium during his playing days.

The baseball Hall of Famer spoke with TMZ about meeting the teenager star, calling it "awesome."

"Lorde is such a sweet little girl," Brett told the gossip site. "She's only 17 years old and she's very talented."

"My wife and I met her after she did her sound check. And then we got to talk to her for a little bit after the concert also," he continued. "We had two cabanas. It's a beautiful place."